The unifying postulate of this P01 proposal is that comparative studies of KSHV, EBV, and MHV68 will accelerate the discovery of pathways regulated by long non-coding RNAs (lncRNAs) that contribute to gammaherpesvirus latency and tumorigenesis. Specifically, we hypothesize A) that herpesviruses utilize lncRNAs to regulate both virus and host gene expression, and B) that viral lncRNAs and/or virus-perturbed host lncRNAs directly contribute to the genesis of virus-associated AIDS malignancies. To address these hypotheses we propose three highly integrated projects with the goal of functionally analyzing lncRNAs and their mechanisms of action. Project 1, led by Dr. Renne (University of Florida, UF), will investigate KSHV- encoded lncRNAs and alteration of host lncRNA expression in the context of HIV-associated KSHV malignancies. Project 2, led by Dr. Flemington (Tulane University) will interrogate Epstein-Barr virus lncRNAs and alteration of host lncRNA expression in the context of HIV-associated EBV malignancies. Project 3 led by Dr. Tibbetts (UF) will investigate function of MHV68 lncRNAs and alteration of host lncRNAs in the context of latency and lymphomagenesis in a facile murine model. Importantly, all projects are supported by strong novel preliminary data, including the discovery of new gammaherpesvirus lncRNAs using a novel multi-platform genomics approach and implicating some of these lncRNAs in viral biology and pathogenesis. The well- organized Administrative core (Core A, Core Leader: Rolf Renne) will maintain oversight and organization of the program, including biostatisical consultation and adherence to reproducibility and transparency standards. Two additional service cores, which are already established and very productive, will support sequencing, bioinformatics and recombinant virus generation needs across the three projects: The Virus RNA-seq and Bioinformatics Core will be maintained at Tulane University (Core B, Core Leader: Erik Flemington). The Recombinant Virus Core, which was established with an NCI-funded RC2 award in 2009, will be maintained at UF (Core C, Core Leader: Rolf Renne). In addition, Dr. Parsons (LSUHSC, New Orleans), who leads the NIH- supported LSUHSC/LCRC HIV Clinical and Biospecimen Repository, will facilitate the acquisition of valuable Kaposi's sarcoma (KS) and lymphoma tumor specimens from HIV-infected patients. Our proposal is significant and highly innovative in terms of the field of study – “understanding virus and host lncRNA function in gammaherpesvirus tumorigenesis” – and in applying numerous state-of-the-art techniques across all three projects. Finally, studying pathogenesis-relevant tissue culture and animal models, complemented by the analysis of human tumor tissues from EBV- and KSHV-associated malignancies, will greatly increase our understanding of both viral and host lncRNAs in the context of AIDS malignancies. 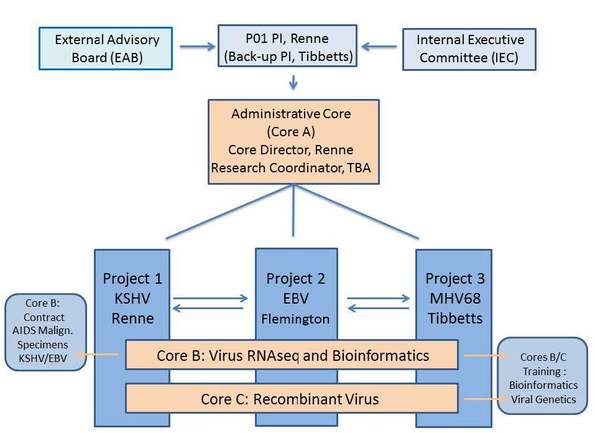 The unifying postulate of this P01 proposal is that comparative studies of KSHV, EBV, and MHV68 will accelerate the discovery of pathways regulated by non-coding RNAs (ncRNAs) that contribute to gamma- herpesvirus tumorigenesis.